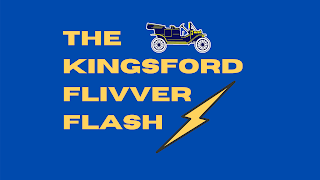 With Spring Break 2021 less than a week away, it's almost time to fire up, "THE KINGSFORD FLIVVER FLASH!" podcast again! With a new season, we have a new logo!

The 2020 season was a hot mess for everyone around the country. As a matter of fact, some high school football teams are playing right now. We wish them the best as they navigate not only spring 2021, but also fall 2021.

Season 20 of "THE KINGSFORD FLIVVER FLASH!" featured 32 episodes, 23 guests, and was expanded from an audio podcast to a YouTube podcast starting last May.

Season 21 of "THE KINGSFORD FLIVVER FLASH!" will kick off the week after spring break and be available wherever you listen to podcasts, as well as on YouTube.

Check the links below and subscribe so you never miss an episode.

Stitcher: https://www.stitcher.com/podcast/anchor-podcasts/the-kingsford-flivver-flash
at March 23, 2021 No comments:

If you are a fan of Kingsford Football, you have seen the Single Wing formation. The Menominee Maroons still attempt to overpower their opponents with this formation that comes out of the early 1900s and coach Glen "Pop" Warner. I'm guessing that you have heard the name, "Pop Warner!"

The traditional Single Wing is recognizable by its unbalanced line (Four linemen on one side of the center and two on the other), a wing-back lined up outside of the Tight End, and the three running backs, none of which are under center like we think of football today. Most plays involve the center directly shaping the ball to either the full-back or the tail-back who in turn will either run, pass, or hand the ball off to another running back.

The name, "quarterback" originally comes from the Single Wing. In the formation above, you will see that the Full Back is about four yards behind the line of scrimmage. The quarterback is as tight to the line as he can get, attempting to be about one yard or one-quarter of the distance from the line of scrimmage as the full-back. In the single-wing offense, the quarterback is also referred to as a blocking back because of his duties to block for the other running backs, although in some plays he will carry the football or go out for a pass.
The Single Wing was the starting point for other formations and offensive systems such as the "Full House" or "Power T," the Double Wing, and the Wing-T. All of these variations were tweaks that were made as football progressed to take advantage of faster running backs, players that only played one side of the ball and more powerful passing attacks.

The easiest way to see this transition is to look at a basic Wing-T formation. Note how the offensive line has balanced itself and placed a split end to the tailback (sometimes called "half-back") side. The quarterback has moved under center and is in a position to distribute the football via handoff or forward pass.

The Single Wing is sometimes used by college and NFL teams in what they call a "WILDCAT" package, where they are playing some form of direct snap football. Younger players and fans will get excited when they see their favorite team move into a "WILDCAT" formation.

Old school coaches and fans who have been around the game awhile crack a smile because they know that football is coming back to its origin.

You call it WILDCAT. I'll stick with Coach Warner's name: Single-Wing
at May 16, 2020 No comments: 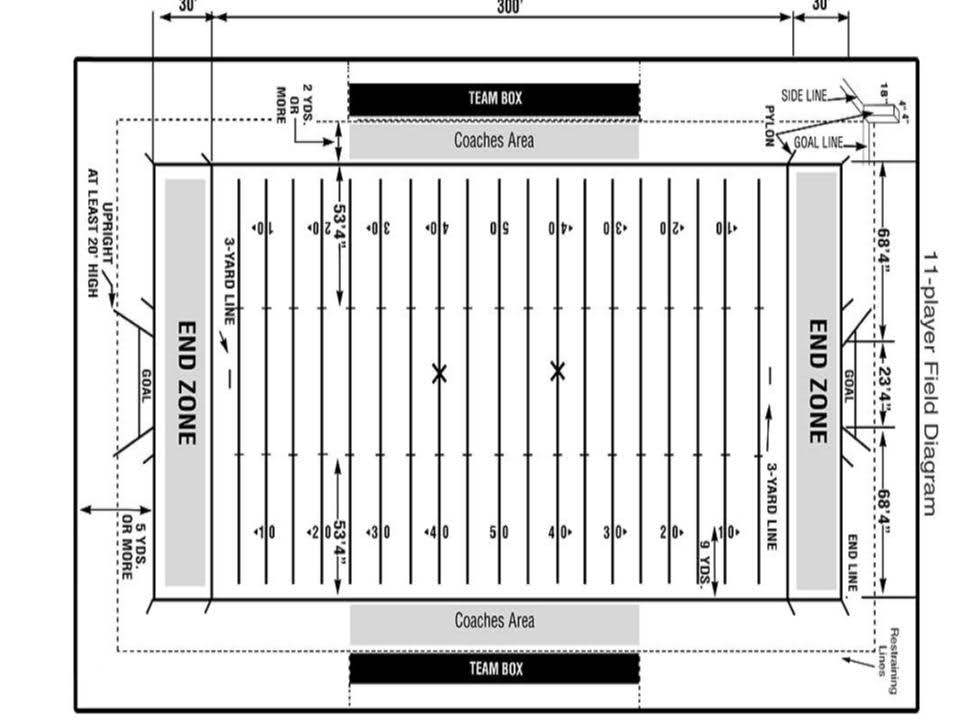 Football coaches take for granted that everyone knows what a football field looks like. That isn't always true!

Each team conducts its kickoff to start each half and after a score from their own 40-yard line and the receiving team must be on their side of the 50-yard line. 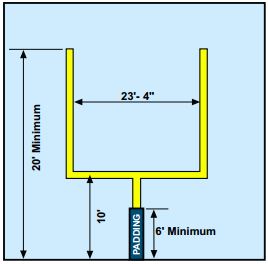 After a score, the ball is placed on the 3-yard line where the scoring team can either kick it through the uprights for one point or execute an offensive play (run or pass) for two points. This is called the PAT or Point After Touchdown.

The crossbar of the goal post is 10 feet off the ground and 23'4" for a high school field. College and NFL goalposts are narrower at 18'6".

Our philosophy at Kingsford Football is simple:

It's what we say when we breakdown after practice, it's something we talk about all the time, and it's something that our student-athletes are buying into.

As football coaches, we are teaching a lot more than blocking and tackling. We are teaching responsibility, ownership, accountability, and a plethora of other lessons. All of those lessons can be broken down into our three winning categories. 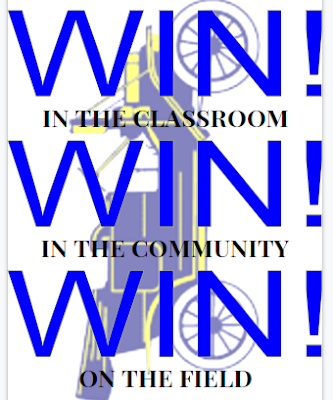 1. Win in the Classroom: This is about the "student" portion of being a student-athlete. This does not only mean having good grades, but also appropriate behavior and respect for other students, staff, and facilities.

2. Win in the Community: We are all members of the community and Kingsford is a great place to live! We instill in our players that to win in the community, you have to be involved in it. That could be helping place flags at the local cemetery, ringing the bell for the Salvation Army, or taking part in the 4th of July parade. We owe our support to the community based on all of the things the community does for us.

3. Win on the Field: This is the one everyone gets excited about, but it's irrelevant unless the other two wins are taking place. This involves the weight room, the locker room, and taking care of our own on the field. This also includes being coachable, a great teammate, and having impeccable sportsmanship.
at April 18, 2020 No comments:


We love to see student-athletes in the weight room!
But why? 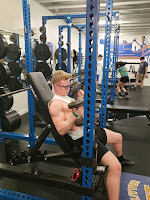 There are a few reasons, some of which go beyond Fall Friday nights.

1) Strenght and Physicality: Obviously, the stronger you are, the better you will be able to perform your job on the field. That's a no-brainer. If you are stronger than your opponent, you will win more of those one-on-one battles and potentially help win the football game. Whether you are a running back trying to break through the tackle of a linebacker or a strong safety who needs to tackle a receiver in space, it will be easier if you are stronger.

2) Injury Prevention: Not only are you training your body to move correctly and strengthening muscles, but you are also strengthening and improving flexibility in your tendons and ligaments. Stretching and running is part of being int he weight room and they are integral parts of preventing injuries. 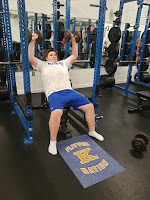 3) Mental Toughness: You are making your body tougher, but you are also strengthening your mind. When you push through a hard-running sequence or push though a three rep mas, you are making up your mind that you can do hard things. If that hard thing is a fourth and goal at the 1-yard line, you have already proven to yourself that you can do hard things. So your mind will be ready to push that extra inch and score that touchdown. 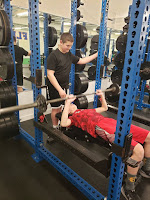 4) Team Building: Getting into the gym and sweating with your buddies is a great way to build that team. Cheering each other on when you complete a hard lift and helping a teammate with a spot when they fail at a heavy lift starts to build trust and faith in your teammates. That will come into play when the hard times come out on the field. Can you trust your teammate? You trusted you on the squat rack so they can trust you on the 3-yard line. 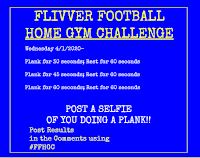 On the Flivver Football social media pages, we have started pushing out daily challenges. You can check them out!

We will get through and move past this COVID-19 pandemic and we will come out stronger on the other side. We always do!

Post a comment below of what you are doing to get through this tough time.
at April 04, 2020 No comments:

The Kingsford Flivver Flash! podcast has had some great episodes where we talk with a former Kingsford player. These young men have sprung off into the world to do great things. Some are finishing up their college career, while some are just starting.

That reminds me...I need to get some OLDER FLIVVERS for the flashback episodes! Contact me if you want that to be you! You can email football@kingsford.org or message us on any of our social media platforms, or comment on this post!

Here are the Flivver Flashbacks we have conducted so far:

There are a few other episodes that include Flivver Alumni, but they now serve in a different capacity.

Nick Gayan graduated from the Flivver Nation and has been teaching in the High School since the early 1990s. He is also a football referee!
Season 20- Episode 3: HEY REF!! Sit Down with Referee- Nicholas Gayan 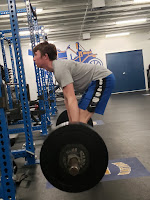 Sometimes it's hard to get up in the morning and get to the weight room, but it is so worth it!

The Flivver weight room has been open on Monday and Wednesday mornings for players to get their lift in. Usually, there are 3-8 student-athletes and they lift from 6:15 till about 7:00-7:15.

Some Benefits of Lifting in the morning:

1) Schedule: For students who work or play a spring sport, it's a great time to get their lift in without disrupting the rest of their schedule.

2) Feeling Better: It's a great way to start your day, working hard and getting a workout in. It really starts your day off right to get your muscles working and your blood pumping!

3) Discipline: It isn't easy to get up early in order to get to the weight room and work hard. That's what makes it so great! If you can discipline yourself to get up and go workout, you will build that mental toughness needed on the 1-yard line.

Keep an eye on Social media for lifting dates and times in the future.
As of now, the weight room will be closed through April 6, 2020.
at March 14, 2020 No comments:

With Spring Break 2021 less than a week away, it's almost time to fire up, "THE KINGSFORD FLIVVER FLASH!" podcast again! With ...